Walking in Karlstejn and New World in Prague

Greg has been reminding me that most people don't come to the Czech Republic to look at beetles and wildflowers, but instead want to see baroque buildings, art nouveau embellishments, and other architectural treasures (and, of course, to drink the beer). So I've decided to talk about some buildings that interest me.

Last weekend we took a short train trip to Karlstejn, which is best known for its castle. We enjoy the small tourist-friendly town at the base of the hill, and we usually have tea before walking up to the castle. The original structure was built by Charles IV as a country retreat, but the building you see in this picture is largely a 19th century reconstruction. For me the castle is mostly an excuse to take a train trip to an area of natural beauty: 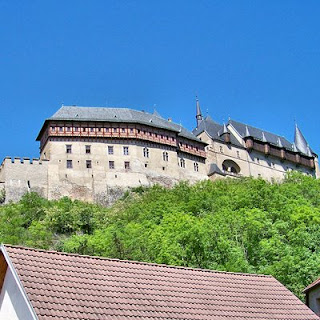 After we drank our tea, we walked up the hill through a wooded area that's part of the Cesky kras protected landscape. I took a few pictures of small creatures I saw there, like this snail: 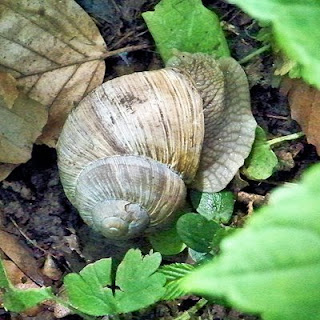 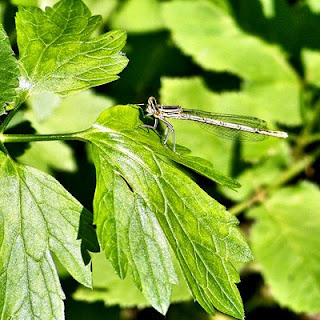 When we reached the top of the hill, we spent a while looking down from the castle's fortified walls at the rolling green landscape below before turning around and walking back down to catch the train: 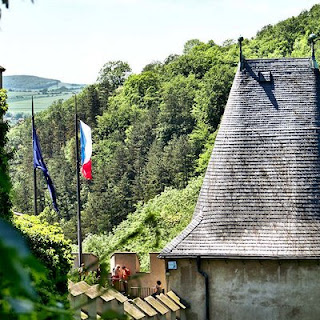 Also this past week we took a walk in Novy Svet (New World), which is a street of small cottages that used to be the homes of the people who worked at Prague castle. The area is very close to the castle but does seem in many ways like a different world: 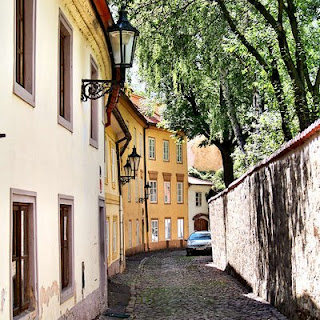 For me the most interesting thing about this area of narrow tree-shaded lanes is its wealth of intriguing details. I like this door knocker: 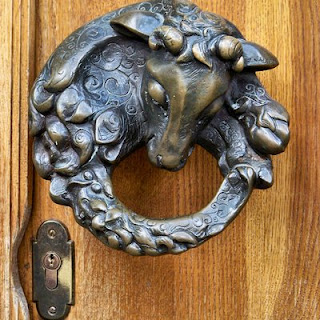 And this planter on the balcony at the surrealist gallery: 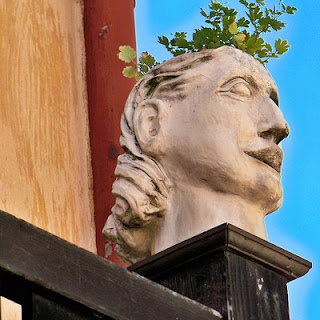 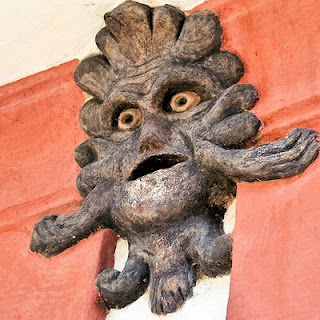 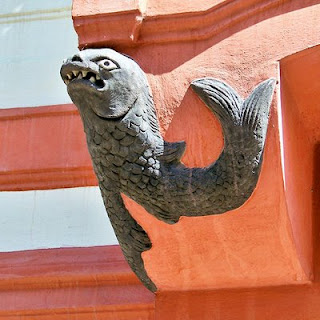 And this statue of a saint or king: 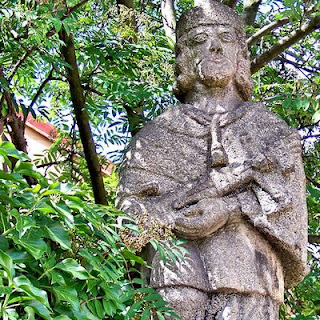 Here at Fashion Sense, we've seen the new Star Trek movie and honestly don't understand all the rave reviews. We still prefer Star Trek IV (Save the Whales!). [Click on the image for a larger version of this cartoon. The text reads: 'When Penny came over to my house last night she said, "Where's your monkey?" and I said, "Peanut wasn't very happy with me, so I let him go live in a primate sanctuary," and she said, "You must be really lonely without any animals around," and I said, "I adopted a couple of whales through a wildlife conservation group. There's a picture of my humpback’s tail," and she said, "Too bad he can't live here," and I said, "He could if Scotty would make him a transparent aluminum aquarium like in Star Trek IV," and she said, "Speaking of Star Trek, did you see the new movie?" and I said, "I was very disappointed. Star Trek is supposed to be full of meaningful if obvious references to real-life problems, and now it's just another action-adventure franchise," and she said, "You know, there weren't many carry-overs from the old movies or TV shows, though they did manage to include a green Orion animal woman in a bikini," and I said, "At least the original sexism survived," and she said, "And they killed off most of the Vulcans so Spock could announce he was a member of an endangered species," and I said, "Whereas in Star Trek IV Spock was trying to help an endangered species, namely humpback whales, " and she said, "Well, the new movie was a huge hit, so I suppose it's nice to see an old favorite like Star Trek live long and prosper," and I said, "I find your attitude most illogical."']
- May 25, 2009 No comments:

Wildflowers in Petrin Park in Prague

Petrin Park is now in full leaf, and all the blossoms have disappeared from the apple trees. I took this photo a few weeks ago when there were still a lot of lilacs blooming on the hill. The flowers make a nice backdrop for the statue of Czech poet Karel Hynek Macha. Notice that he's clutching a lilac bouquet, too: 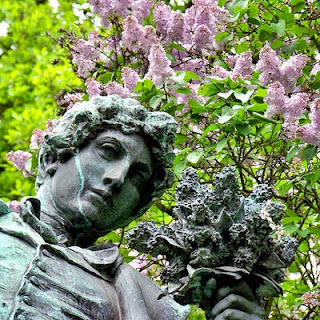 Now the weather is summery -- humid and warm -- and I've been having trouble getting clear pictures of birds because there's so much foliage. So I decided to concentrate on the micro-view, and I found a small weedy patch and looked at wildflowers. This is, I think, a type of bladder campion (Silene vulgaris): 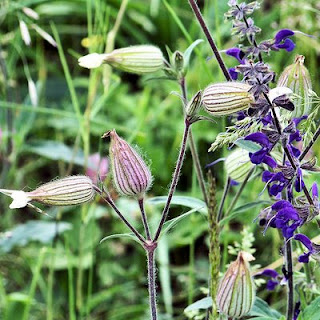 And this is meadow clary (Salvia pratensis): 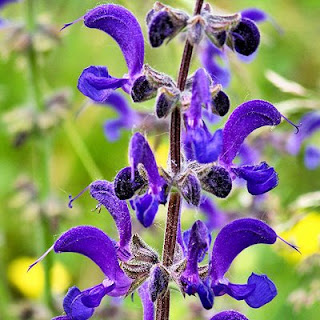 I also saw a number of different types of columbine (Aquilegia vulgaris): 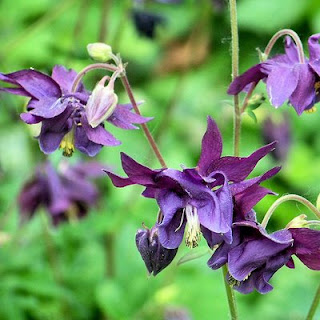 Busy among the leaves and stems were a number of insects, including this Seven-Spotted Ladybug (Coccinella septempunctata): 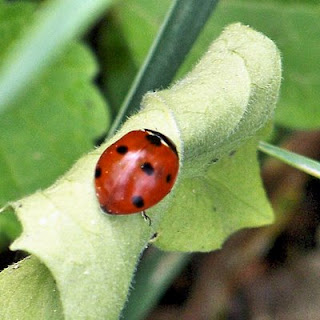 Email ThisBlogThis!Share to TwitterShare to FacebookShare to Pinterest
Labels: Wildflowers in Petrin Park in Prague

During the May Day weekend, which is a holiday weekend here in the Czech Republic, Greg and I went to Strelecky Island (Marksman's Island in English) to relax and enjoy the deep shade of hundreds of beautiful trees. There are many horse chestnut trees on the island, all of which were in spectacular bloom. Maybe because I'm from Ohio, the Buckeye State, I've always loved horse chestnut blossoms, which remind me of tiny orchids: 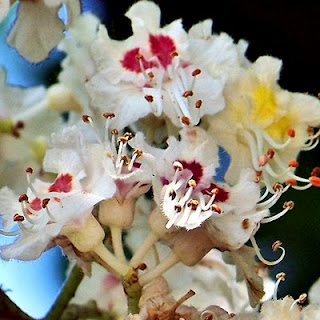 Strelecky Island divides the Vltava River not far from Kampa, and to get down onto the island itself you can take one of the short flights of stairs on either side of the bridge (known as most Legii). This is how the trees look from the bridge as you look down at the island: 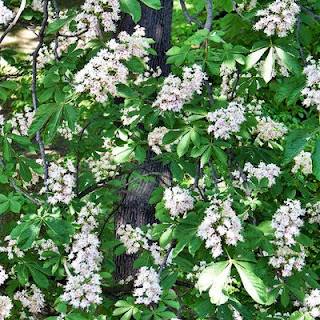 And this is how the trees look on the island itself, almost like a small forest. There are oaks and maple trees in addition to the many horse chestnuts: 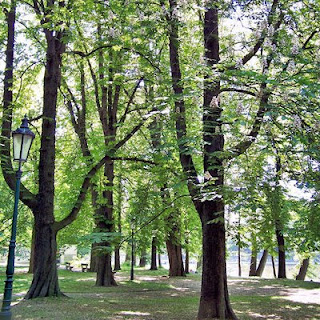 The island has a restaurant at one end, and it's the site of a summer theater festival, but I love Strelecky for the fact that you can belly up to the river (no cement embankments -- just grass and mud) or sit on a bench and watch the boats and water birds while enjoying the breeze and the shade. There are lots of different kinds of boats to look at: 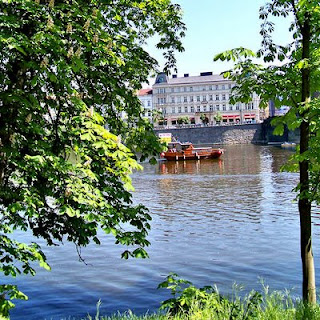 Including the somewhat disorienting sight of two people in a swan-shaped paddleboat: 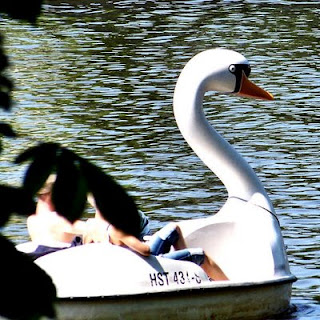 When Greg and I got back to our apartment after our pleasant time on Strelecky, I wanted to know more about the island. Greg did an internet search and found, among other things, an article on Novinky.cz entitled "Strelecky island awaits a 40 million crown revitalization." He translated it for me, and I immediately felt stunned and saddened. According to the article, the mayor of Prague 1 (the part of the city in which the island is located) says Strelecky is completely substandard and needs to be reconstructed so that it can once again be a fully functioning park, "not a single screen for an outdoor movie theater or a place for the homeless to camp for the night." According to the architect of the reconstruction, roughly 90 trees from the total of 300 on the island will have to be cut down.

During this time of climate change, I thought, isn't everyone aware of how important trees are? The beautiful and mature trees on Strelecky are far more important than any promenade. And I can attest to the fact that the park is utilized by large numbers of people other than the homeless (for whom I can certainly imagine it's a better place to sleep than a doorway).

As I've noted many times in this blog, Prague has many beautiful parks, and each of them seems to offer unique opportunities for recreation and relaxation. But I can't imagine anything that could be done on Strelecky Island that would be better than lazily enjoying the river under the shade of beautiful old trees. I plan to write letters to the mayor of Prague 1, and I hope that either the current economic slowdown or common sense will prevent this reconstruction from taking place.
- May 13, 2009 No comments:

Email ThisBlogThis!Share to TwitterShare to FacebookShare to Pinterest
Labels: Prague Plans Reconstruction of Marksman's Island and Ninety Beautiful Trees are in the Crosshairs

The world is still waiting to see how bad the swine flu outbreak will get. Although everyone's concerned about staying healthy, some people, like shock jock Michael Savage, are using this crisis to spread unhealthy ideas. Also, this flu outbreak is a good reason to take a critical look at factory farms. [Click on the image for a larger version of this cartoon. The text reads: 'When I was on my way to visit my rescued Premarin mare this morning, my right-wing neighbor waved at me as though she had some kind of emergency, so I stopped to see what she wanted, and she said, "Hey! Are any Mexicans on that farm where you keep your horse?" and I asked why, and she said, "Michael Savage says you shouldn't get anywhere near Mexicans or anybody who's been anywhere near Mexicans, because you'll get sick," and I said, "From what I've read, Michael Savage is the one who's sick. Experts say this swine flu originated in the United States," and she said, "We're not supposed to call it swine flu. That's bad for the pork industry. Which reminds me that I'm also angry at the Mexicans for putting that virus into pigs because now I can't eat pork chops or ham, which are my favorites, and later on they'll be more expensive," and I said, "We're not supposed to call it swine flu because agribusiness has so much power they can sue us for defamation when we tell the truth about them. Remember what happened to Oprah when she tried to talk about beef?" and she said, "So are there any Mexicans on that farm?" and I said, "I don't think it's funny to talk about the Aporkalypse, but I also don't think it's the Mexicans that are responsible for this Snoutbreak," and she said, "Well, here's more proof for you: I got one of those e-mail messages telling me that Salma Hayek has swine flu, and I thought, 'She's Mexican, so it's got to be true,' and when I opened the email I got a virus on my computer which proves that Mexicans give you viruses," and I said, "That's some very twisted logic!" and she said, "Thanks. I’ve done a lot of thinking about this thing."']
- May 11, 2009 1 comment: