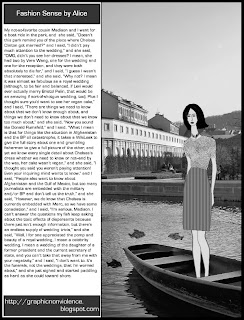 Chelsea Clinton's recent wedding was covered as well as an event with top security could be, but there are extraordinary events that we aren't getting enough information about, like the war in Afghanistan and the aftermath of the BP oil leak in the Gulf of Mexico. [The text reads: 'My not-so-favorite cousin Madison and I went for a boat ride in the park, and  she said, “Doesn’t this park remind you of the place where Chelsea Clinton got married?” and I said, “I didn’t pay much attention to the wedding,” and she said, “OMG, didn’t you see her dresses? I mean, she had two by Vera Wang, one for the wedding and one for the reception, and they were both absolutely to die for,” and I said, “I guess I wasn’t that interested,” and she said, “Why not? I mean it was almost as fabulous as a royal wedding (although, to be fair and balanced, if Levi would ever actually marry Bristol Palin, that would be an amazing if sort-of-shotgun wedding, too). Plus I thought sure you’d want to see her vegan cake,” and I said, “There are things we need to know about that we don’t know enough about, and things we don’t need to know about that we know too much about,” and she said, “Now you sound like Donald Rumsfeld,” and I said, “What I mean is that for things like the situation in Afghanistan and the BP oil catastrophe, it takes a WikiLeak to give the full story about one and grumbling fishermen to give a full picture of the other, and yet we know every single detail about Chelsea’s dress whether we need to know or not--and by the way, her cake wasn’t vegan,” and she said, “I thought you said you weren’t paying attention! Even your inquiring mind wants to know,” and I said, “People also want to know about Afghanistan and the Gulf of Mexico, but too many journalists are embedded with the military and/or BP and don’t tell us the truth,” and she said, “However, we do know that Chelsea is currently embedded with Marc, so we have some consolation,” and I said, “I’m serious, Madison. I can’t answer the questions my fish keep asking about the toxic effects of dispersants because there just isn’t enough information, but there’s an endless supply of wedding trivia,” and she said, “Well, I for one appreciated the pomp and beauty of a royal wedding, I mean a celebrity wedding, I mean a wedding of the daughter of a former president and the current secretary of state, and you can’t take that away from me with your negativity,” and I said, “I don’t want to. It’s the funerals, not the weddings, that I’m worried about,” and she just sighed and started paddling as hard as she could toward shore.']
- August 17, 2010 No comments: