In a couple of days Greg and I will be leaving Prague, and when I write my next blog post we'll be home in Tucson. Last night we took a walk on Petrin in the cool shady evening, amazed at the amount of activity we saw. It was after 8:00 p.m., but dozens of people were walking their dogs, there were lots of blackbirds looking for an evening meal, and there was even a party going on at the restaurant (yes, there's also a restaurant on Petrin, halfway up the hill near the funicular railway stop).

Living here in Mala Strana, I've been impressed by the amount of greenery and natural beauty I've been able to find, despite the fact that this is a heavily touristed area in the middle of a European capital. In addition to walking on Petrin hill, Greg and I have had lots of walks on Kampa near the river, where I've seen swirling clouds of swifts feeding on insects, not far from the very chic Kampa Art Museum.

A couple of days ago we took a last walk on Strelecky Ostrov for this year, and we noticed once again how big the trees are and how natural-looking its shoreline is. The fact that the city is planning to "improve" Strelecky made me want to write about it one more time.

Though there's a restaurant at the south end of the island, the north end is covered with mature trees, and the beach is small but sandy. We saw wood pigeons, blackbirds, and dozens of ducks in the water: 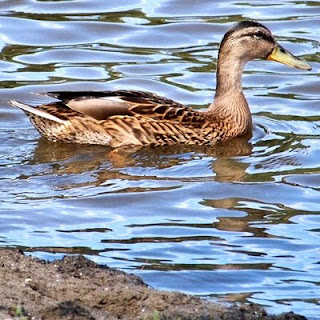 The ducks use the island as a place to bask in the sun: 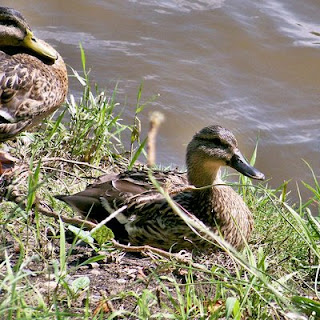 From many angles, the leafy shade of the trees and the natural shore make it seem as though you're far from the city: 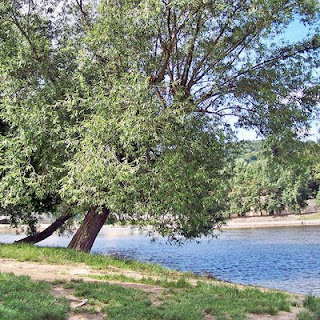 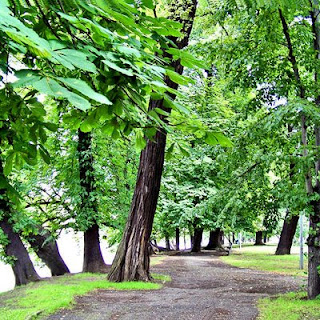 Until you change your perspective and then you see that Strelecky is an island of calm and green in the middle of a tourist zone: 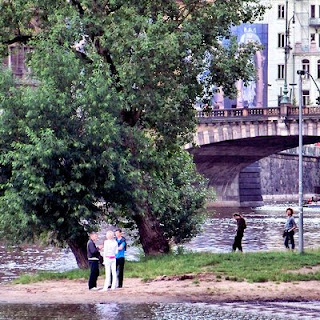 As we walked, we fervently hoped that the city will cancel its development plan and leave the green gem that is Strelecky Ostrov in its current excellent condition.

As we climbed back up to the bridge (Most legii) to leave the island, I looked down over the railing and saw a moorhen (Gallinula chloropus) preening itself on the cement base of the bridge. Since it was first moorhen we've ever seen, Greg took some pictures: 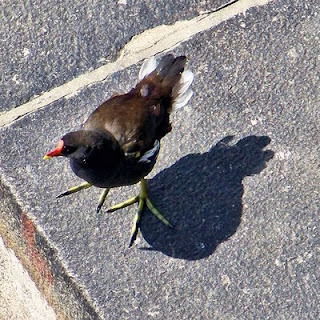 Big Love got an Emmy nomination for best drama, and though I've only been able to tolerate watching it for a few minutes, I have a very strong opinion about it. [Click on the image for a larger version of this cartoon. The text reads: 'Leda came over while the rabbit and I were doing aerobics, and she said, "Did you hear 30 Rock got 22 Emmy nominations?" and I stopped exercising and said, "Yeah, but unfortunately Big Love was nominated for best drama," and she said, "The show about the guy with three wives?" and I said, "That's the one," and she said, "I watched it for about five minutes and I couldn't stand to see those women competing over the same man and raising his kids within sight of each other," and I said, "The Mormon church outlawed polygamy but apparently lots of people in Utah and Arizona still live that way," and she said, "They seem to be able to have a lot of kids fast -- if that's the kind of thing you're into," and I said, "Rabbits aren't monogamous, which is probably why they're such legendary breeders," and we both looked at my rabbit, and he nodded his agreement, and Leda said, "But you would think humans would realize the earth is straining under the weight of nearly seven billion of us, so we don’t need to fixate on reproduction," and I said, "So are there any shows about women with more than one husband? And would that be better?" and she said, "I don’t know, but in that case the men would be the ones who would have to compete with each other for the wife's attention, rather than the reverse. There would probably be a lot of conflict," and I said, "I don’t think I’d like a show about that either," and Leda said, "I'm sure some politicians are fans of Big Love. I mean if we legalized polygamy in the U.S., guys like Mark Sanford wouldn't have to sneak to Argentina," and I said, "Yeah, I guess you're right; in a country as pro-marriage as this one, polygamy is the only way for these guys to get what they want," and she said, "What a thought," and she took out her phone, and I said, "Please don't Tweet about it -- you don't want to start a trend," and she said, "I'm not. I just wanted to make a movie of your rabbit doing aerobics," which she did and then posted it on YouTube, and my rabbit has hopes it will go viral because he wants to star in an all-rabbit version of Big Love.']
- July 18, 2009 No comments:

Email ThisBlogThis!Share to TwitterShare to FacebookShare to Pinterest
Labels: Fashion Sense Asks if Big Love Deserves an Emmy or a Cancellation

The Czech Museum of Music in Prague

Across the street and down half a block from our apartment here in Prague is the Czech Museum of Music. The building itself is a former church that was deconsecrated in 1783 and has since been everything from a post office to a police barracks. The museum is surprisingly fun and interesting. First of all, I like the building itself, which doesn't really stand out all that much among all the historic buildings here in Mala Strana, but has a striking cupola (or maybe it should be called a clerestory). Once inside the building, you see an enclosed staircase that reminds me of an MC Escher drawing: 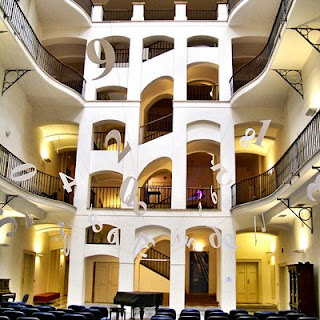 The museum's collection of instruments is nicely presented, and each room contains headphone sets on which you can listen to the instruments on display nearby. These include a wide variety of historic and unusual instruments. We enjoyed listening to a composition played on this old synthesizer: 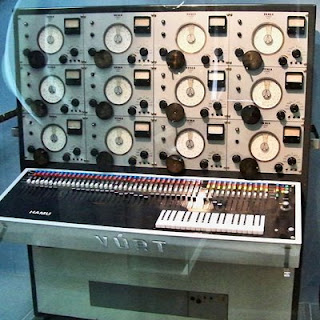 Also of interest are the sediphones, made by Josef Sediva and popular with Russian military bands in the early twentieth century: 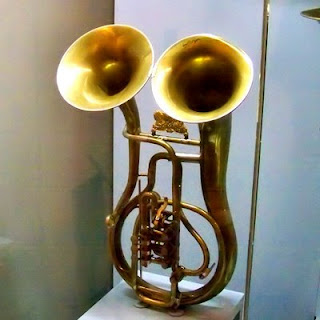 There are also two glass harmonicas: 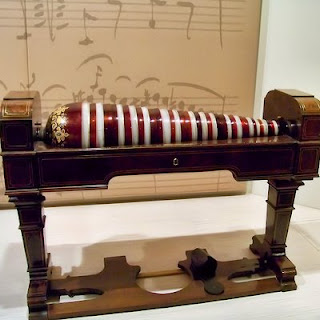 And this beautiful fairground organ: 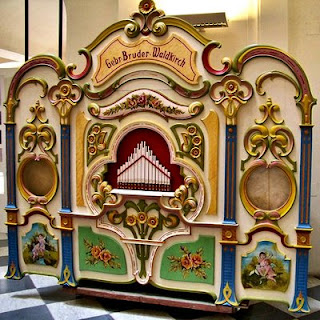 The evening of June 20 was Prague Museum Night -- a long twilit evening when all the museum admissions were free. As I already mentioned, the Museum of Music is very close to our apartment, so we got there to hear some fanfares played at the very beginning of the evening and then went to hear a recitation of some text by Durrenmatt accompanied by a jazz group called Nocni Optika at around 10:30. Because the days are so long here near solstice there was still a little light in the sky when we went to hear that performance.

Prague is of course known for the music of Dvorak and Smetana and for being the place where Mozart's Don Giovanni was first performed. There are many classical music performances each week, but I don't ever go to them because I don't usually listen to anything but jazz. However a few weeks ago the Museum of Music presented a concert by cellist Jiri Barta who played two pieces by Czech composer Bohuslav Martinu. After dinner we just walked across the street to hear the concert, and I enjoyed both the music and the surroundings.

From posters at the Museum of Music we learned that there is a Museum of Mechanical Instruments in the town of Horovice, which is about forty miles outside of Prague. Last Saturday we went there by train and then walked to the Horovice Chateau which houses the collection. We enjoyed the grounds while we waited for the docents to come back from lunch. The chateau has been nicely restored: 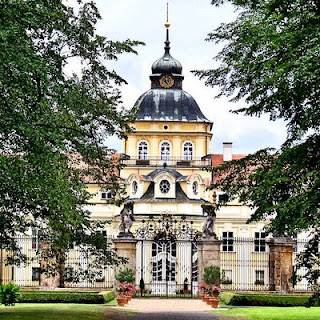 The grounds are well maintained: 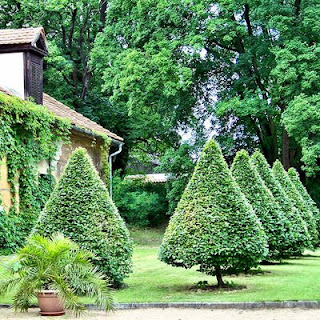 And the chateau itself is full of beautiful objects like this: 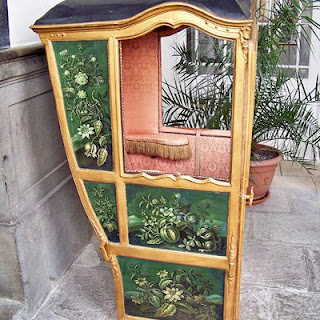 Then we were given a tour of the collection by a very pleasant young woman who showed us a variety of music boxes, pianolas and player pianos, musical pictures (paintings that play a melody like a music box does), gramophones and musical clocks. A few of the mechanical instruments are in good working order, and we enjoyed hearing their plaintive but surprisingly vibrant music. There was even a player piano that could be pedaled like a treadle sewing machine. Though I wasn't able to take pictures of that collection, here's a picture of the workings of an orchestrion from the Prague museum: Email ThisBlogThis!Share to TwitterShare to FacebookShare to Pinterest
Labels: Czech Museum of Music in Prague

When I'm in Prague, I'm constantly amazed at how good the public transit is, and I enjoy riding the trams. However, my major mode of transportation here is walking. As a result, I spend a lot of time looking down at the cobblestone streets, sidewalks, and alleyways in the city center. Because of that, I had the idea to make a little movie based on a story I wrote, and Greg helped me with it. As you'll see, the cobblestones get star billing:

Fashion Sense Comments on the Death of Michael Jackson