Fashion Sense Thinks Bush is a Better Illusionist Than Blaine

David Blaine's dive of death wasn't considered to be a great success. Now the Bush administration is trying to keep its credibility among Republicans while bailing out Wall Street. If they succeed, it will be one of the greatest illusions of all time. [Click on the image for a larger version of this cartoon. The text reads: 'Leda's father was at her place watching financial news on her plasma screen TV, and he was going ballistic about the stock market, so she came over to my place, and we watched re-runs of David Blaine hanging upside down for sixty hours and making his supposed dive of death, and Leda said, "Actually, that was pretty lame," and I said, "A lot of stuff he does is pretty lame, but Houdini showed that taking senseless risks can sometimes be spectacular," and Leda said, "But Blaine didn't even stay upside down the whole time; he took breaks," and I said, "It would have been too risky to be upside-down the whole time -- it could have made his head explode or something," and she said, "Now that would have been spectacular," and I said, "The rabbit and I like him because he doesn’t use any animals in his act, and also I think he’s trying to tell us something," and Leda said, "What?" and I said, "He was hanging upside down over New York while the government figured out how to bail out Wall Street, and he didn’t do a very good job of it. Maybe he wants us to know that big finance is the greatest escape artist, and the government is the real illusionist, as they try to make a multi-billion dollar bailout at taxpayers expense seem reasonable," and she said, "So Blaine represents the little guy who has to manage his own risks, while the Bush administration doles out corporate welfare and turns everything they’ve ever said about the free market upside down," and I said, "It’s enough to make your head explode," and she said, "I think I better go check on my dad," and after she left, the rabbit and I tried to do a little levitation act, which is our way of saying we'll have to hang tough until we see how the latest Wall Street illusion works out.']
- September 26, 2008 No comments:

Some women are impressed by Sarah Palin's fashion sense and claim they will vote for her because she is a woman, but that doesn't make sense to Fashion Sense. [Click on the image for a larger version of this cartoon. The text reads: 'Michelle Obama made People Magazine's best-dressed list, and I really like her crisp, classic look, so I tried to dress like that when I went to meet Tea for lunch, and when I got there I was surprised to see Tea in rimless glasses, open-toed shoes and upswept hair, and I said, "What's with the Sarah Palin look?" and she snapped back, "What's in your bag? Some Michelle Obama terrorist accessories?" and I said, "Let's just have a nice lunch and not get too unpleasant in this election season," and she said, "I'm sorry. I'm not even a Republican, and I don't know what came over me. But as soon as I put on this outfit, I got all self-righteous and developed an enormous appetite for fresh-killed game," and she ordered rare venison, and I had a salad and sneaked a little of it to my tortoise who was the real reason I was carrying such a big bag, and then Tea said, "Is that arugula? You are such an elitist," and then she took out her make-up bag and started doing her lips, and she whispered, "What does it really mean? Lipstick on a pig? Is that some Islamic curse?"']
- September 19, 2008 No comments: 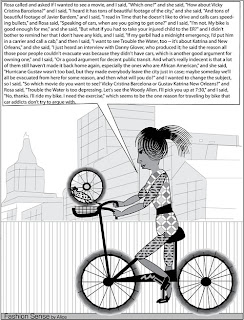 In the wake of hurricane Gustav, I had a few thoughts on Javier Bardem's aversion to cars and on Trouble the Water, a film about Katrina and New Orleans. [Click on the image for a larger version of this cartoon. The text reads: 'Rosa called and asked if I wanted to see a movie, and I said, "Which one?" and she said, "How about Vicky Cristina Barcelona?" and I said, "I heard it has tons of beautiful footage of the city," and she said, "And tons of beautiful footage of Javier Bardem," and I said, "I read in Time that he doesn't like to drive and calls cars speeding bullets," and Rosa said, "Speaking of cars, when are you going to get one?" and I said, "I’m not. My bike is good enough for me," and she said, "But what if you had to take your injured child to the ER?" and I didn't bother to remind her that I don't have any kids, and I said, "If my gerbil had a midnight emergency, I’d put him in a carrier and call a cab," and then I said, "I want to see Trouble the Water, too -- it’s about Katrina and New Orleans," and she said, "I just heard an interview with Danny Glover, who produced it; he said the reason all those poor people couldn't evacuate was because they didn't have cars, which is another good argument for owning one," and I said, "Or a good argument for decent public transit. And what’s really indecent is that a lot of them still haven’t made it back home again, especially the ones who are African American," and she said, "Hurricane Gustav wasn’t too bad, but they made everybody leave the city just in case; maybe someday we’ll all be evacuated from here for some reason, and then what will you do?" and I wanted to change the subject, so I said, "So which movie do you want to see? Vicky Cristina Barcelona or Gustav Katrina New Orleans?" and Rosa said, "Trouble the Water is too depressing. Let's see the Woody Allen. I'll pick you up at 7:30," and I said, "No, thanks. I'll ride my bike. I need the exercise," which seems to be the one reason for traveling by bike that car addicts don’t try to argue with.']
- September 04, 2008 No comments: