The next phase of this year's spectacular cactus bloom has begun. The cholla cacti on the hill behind our house are full of flowers and look like strangely beautiful spiky trees: 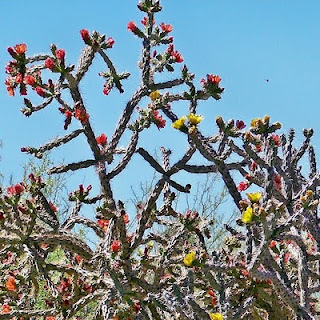 The cholla flowers themselves come in a variety of colors--pink, yellow, red, orange, and my favorite, which is a color I can't quite name: 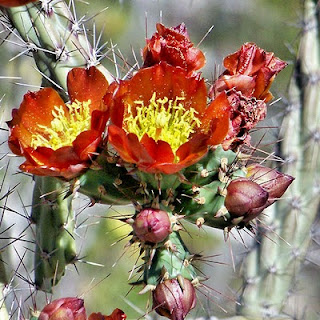 The saguaro in front of our house is full of buds and has also begun to bloom. There are more buds on it than I've ever seen before: 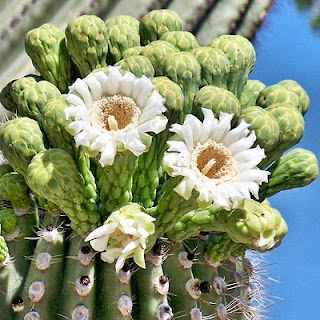 In June and July when saguaro fruit ripens, it is harvested by the Tohono O’odham people and used to make a rare and delicious fruit syrup.
- May 11, 2010 No comments:

[Click on the image to see a larger version] 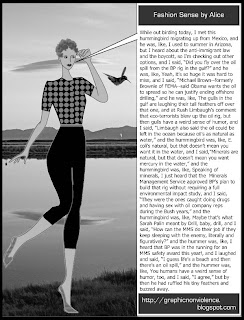 The Deepwater Horizon rig keeps spewing oil into the Gulf, and the failure of the Minerals Management Service to regulate big oil has been brought into sharp focus. You remember the MMS. They're the ones that were involved in the 2008 scandal, caught partying with oil company executives. [Click on the image for a larger version. The text reads: 'While out birding today, I met this hummingbird migrating up from Mexico, and he was, like, I used to summer in Arizona, but I heard about the anti-immigrant law and the boycott, so I’m checking out other options, and I said, “Did you fly over the oil spill from the BP rig in the gulf?” and he was, like, Yeah, it’s so huge it was hard to miss, and I said, “Michael Brown--formerly Brownie of FEMA--said Obama wants the oil to spread so he can justify ending offshore drilling,” and he was, like, The gulls in the gulf are laughing their tail feathers off over that one, and at Rush Limbaugh’s comment that eco-terrorists blew up the oil rig, but then gulls have a weird sense of humor, and I said, “Limbaugh also said the oil could be left in the ocean because oil’s as natural as water,” and the hummingbird was, like, E. coli’s natural, but that doesn’t mean you want it in the water, and I said,”Minerals are natural, but that doesn’t mean you want mercury in the water,” and the hummingbird was, like, Speaking of minerals, I just heard that the Minerals Management Service approved BP’s plan to build that rig without requiring a full environmental impact study, and I said, “They were the ones caught doing drugs and having sex with oil company reps during the Bush years,” and the hummingbird was, like, Maybe that’s what Sarah Palin meant by Drill, baby, drill, and I said, “How can the MMS do their job if they keep sleeping with the enemy, literally and figuratively?” and the hummer was, like, I heard that BP was in the running for an MMS safety award this year!, and I laughed and said, “I guess life’s a beach and then there’s an oil spill,” and the hummer was, like, You humans have a weird sense of humor, too, and I said, “I agree,” but by then he had ruffled his tiny feathers and buzzed away.']
- May 10, 2010 No comments: