[Click on an image to see a larger version of the photograph]
Yesterday we had a day to spend in the Chicago Loop, and we went to the Millennium Park. I was impressed by the Lurie Garden, which is a surprisingly tranquil place in the middle of the hustle and bustle of downtown Chicago. Even though Taste of Chicago was going on, we found red-winged blackbirds singing in the garden and saw lots of butterflies. The garden consists of five acres of greenery tucked among the skyscrapers (that's Sears Tower in the background): 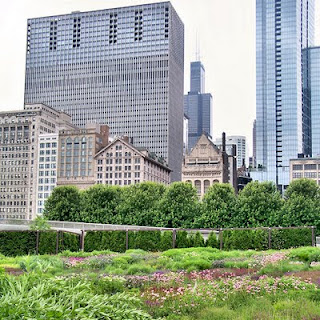 Here's one of the many coneflowers that was blooming: 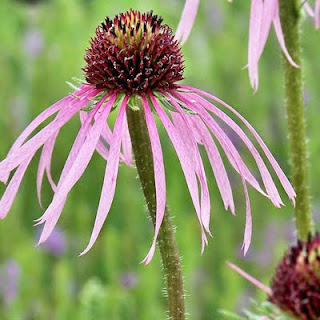 This view of the garden shows how colorful and prairie-like it is: 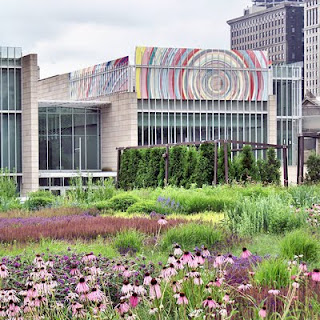 The other thing that really caught my eye in Millennium Park is the outdoor sculpture called the Cloud Gate. Reflections of the sky, the buildings and the people in the park are subtly bent and twisted by the sculpture's mirrored surface. The Cloud Gate was so photogenic I took lots of pictures. Here are just a few: 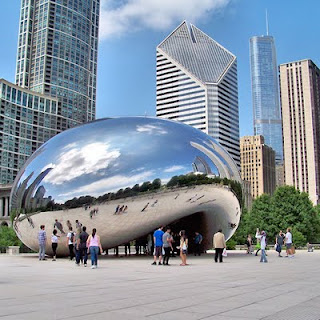 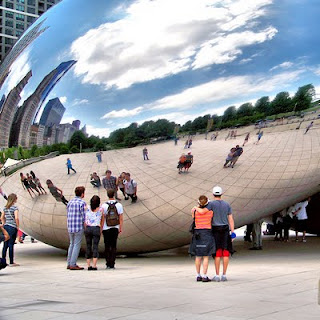 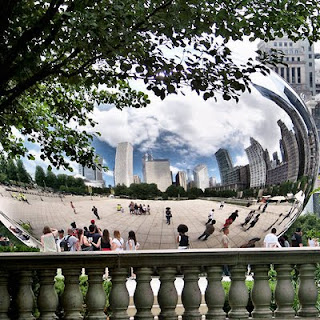 In London at the Victoria and Albert

[Click on an image to see a larger version of the photograph]
Last week in London we went to the Victoria and Albert Museum to see the Cult of Beauty exhibit (which was very nicely done). The V&A is a museum of decorative arts, and it has wide-ranging displays of Chinese, Islamic, Japanese and Korean art, as well as work by British artists and craftspeople.

We had tea in one of the "refreshment rooms" in the Cafe. One of these was designed by William Morris, and here are a few details from that room: 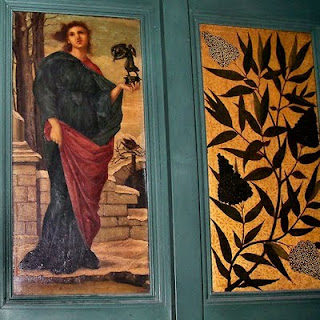 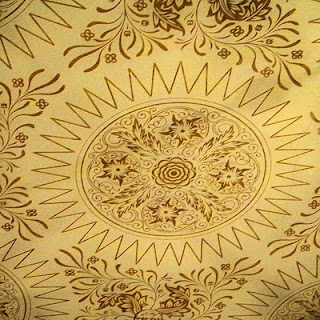 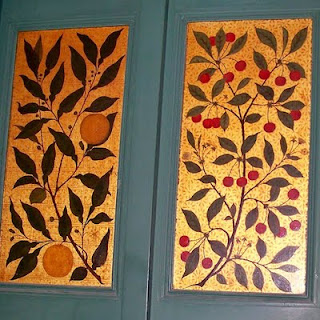 Together, the Morris, Gamble and Poynter Rooms formed the first museum restaurant in the world.

We also spent a lot of time in the Cast Courts, which are filled with copies of European artworks made from plaster casts. I love the juxtaposition of sculpture from many different times and places: 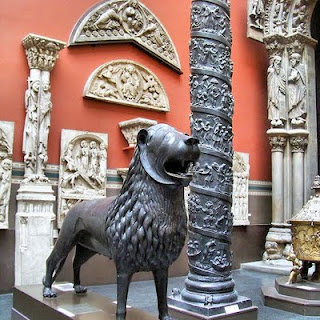 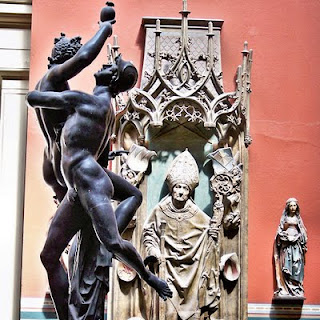 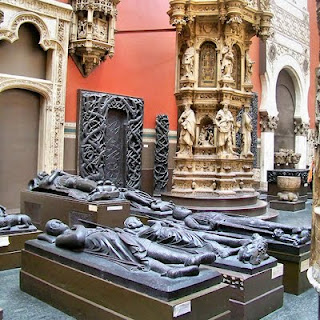 One of the galleries was closed for renovations: 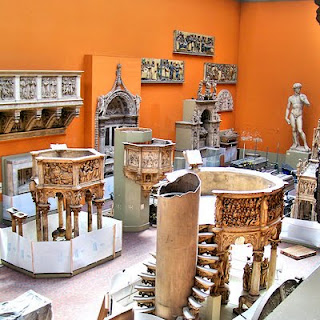 Greg took these droll pictures of the sculptures in the inaccessible gallery: 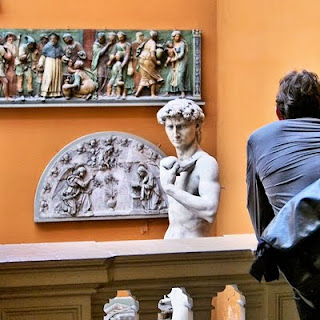 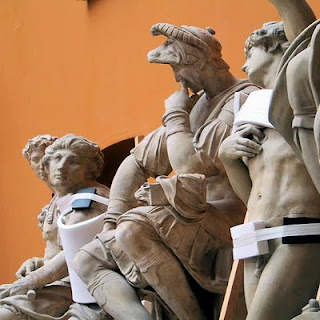 Prague is in the Details

[click on the image to see a larger version of the photograph]
The title of this post might remind you of a quote credited to Mies van der Rohe, "God is in the details," or the variant, "The devil is in the details." Whichever you prefer, these ideas imply that details deserve our careful attention.

Because I've been to Prague many times, I don't really notice the major tourist attractions and well-known sights the way I did when I first began to spend time here in the 1990s. But unusual and often unnoticed details of the city -- whether decorative or architectural or simply aspects of urban life -- still draw my eye and give me pleasure and inspiration.

I haven't taken as many photos here this year as I often do, but I wanted to post a few pictures to show Prague in all its graceful and inspiring details. Throughout the city there is an amazing variety of sculptures, such as this worn but still beautiful statue at the Rudolfinum: 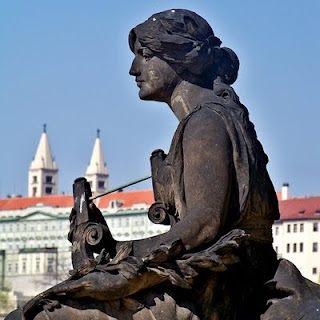 And, if you pause and look upward from time to time as you walk through the streets, you will see beautiful decorative touches on the buildings, such as this art nouveau piece: 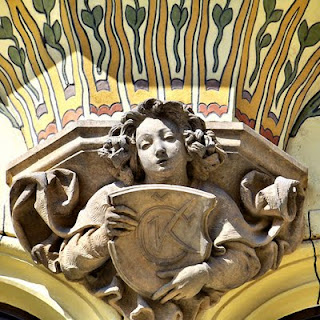 Sometimes the details are more interesting than beautiful: 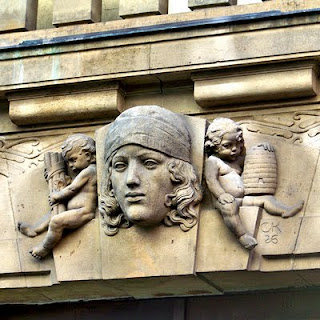 Sometimes they're a little odd, like this sculpture from the building that houses the Cafe Adria: 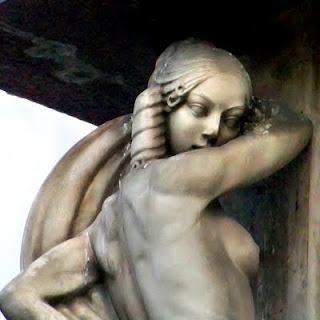 Or St. Sebastian in a niche: 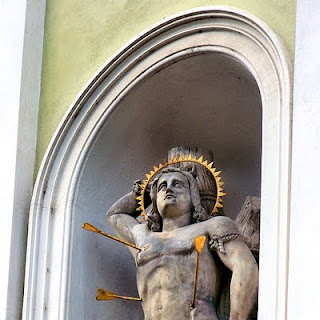 And sometimes, if I'm lucky, I find old statues that have escaped the unrelenting tide of renovation and rehabbing that has changed the face of this city: 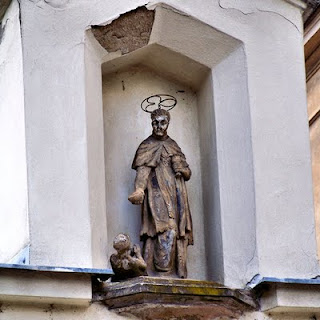 But wherever I go, I pay careful attention because Prague is in the details, and it's an even more rewarding place when you are aware of them.

Email ThisBlogThis!Share to TwitterShare to FacebookShare to Pinterest
Labels: Prague

The National Museum in Prague

[Click on an image for a larger version of the photo]
The National Museum in Prague is located at the upper end of Wenceslas Square, and the building itself is in the neo-renaissance style.  Because it will be closed on July 7, 2011 for a period of major renovation and won't open to the public again until June 2015, we decided to go in and take some pictures of the way it is now. To me the current museum building is a very atmospheric place. Who knows exactly what it will be like in four years when they've finished renovations?

Like many natural history museums, Prague's National Museum has collections of rocks and minerals, fossils, preserved specimens of birds and animals, and additional special exhibits. But to me the building is the most impressive exibit of all. At its heart is the main staircase: 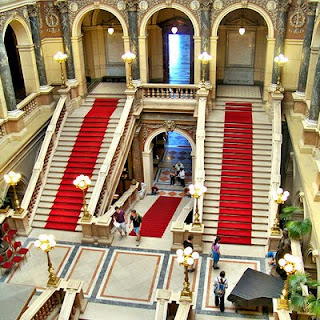 And every time you look up you see many graceful columns and arches: 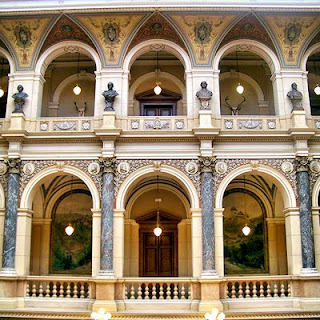 The building contains a "pantheon" of busts of important Czech politicians and writers, but there are statues everywhere, such as this one of Jiří z Poděbrad:: 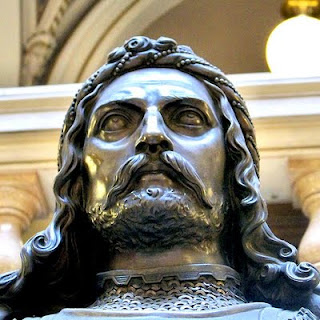 I have a real interest in rocks and minerals, and in fossils, so I enjoy looking at the displays in the museum. It is, however, the details that make the museum a special place. 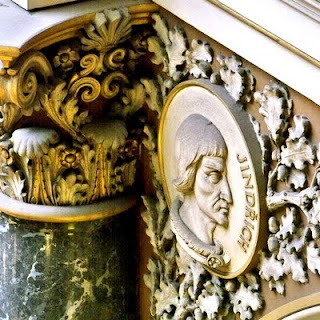 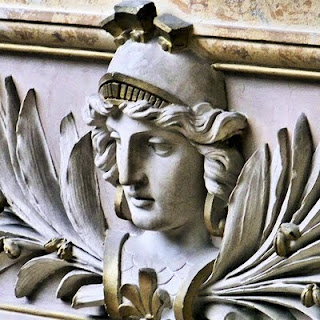 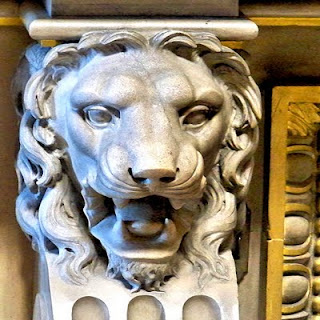 And the collections of stones and bones  seem to complement the sumptuously decorated rooms. 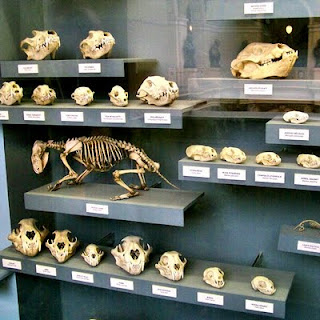 This picture shows how statues and exhibits coexist in the museum. 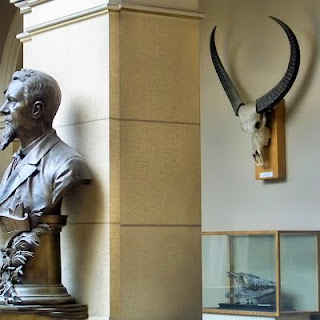 And Greg took this picture which, I think, gives a true idea of the atmosphere of the place: 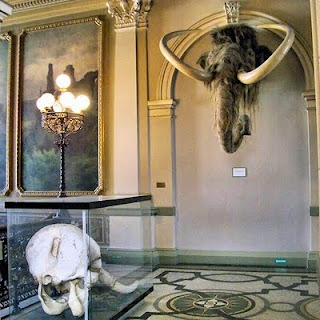