When Greg and I first began to come to Prague in the early 1990s, we read a book called Magic Prague by Angelo Ripellino that helped to direct us toward some of the sights and experiences that we came to value and enjoy here. (This review at Guardian Books gives some idea of why the book influenced us so much.)

Prague in the 1990s had many more mysterious corners and compellingly odd viewpoints than the city does today. In fact, the city center has been renovated almost to the point of what I sometimes call "Disneyfication," with brightly painted walls where there was once worn stone. But Mala Strana, where we have spent the past three months, is still a place of mystery and beauty where much of magic Prague lingers. Here are a couple of pictures of Mala Strana that Greg took the other evening:

Of course Petrin Park is a central feature of the Mala Strana landscape, lending a cool green aspect to this part of the city even on the hottest summer day. Last Tuesday we walked up to the Magic Cave gallery because we'd been there four years ago and enjoyed the ambiance. The work of artist Reon, which includes paintings and sculptures, is always on display, and for a small admission price you can look at the art and listen to the relaxing music for as long as you want.

When we left the Magic Cave, we walked to the top of the hill, then took the funicular back down, enjoying the pleasant little train ride with its great views of Prague.
These are simple pleasures, but the walkways of Mala Strana and the leafy paths on Petrin give more than a hint of the Magic Prague that has attracted us back again and again since our first visit here in 1993.
- July 26, 2013 No comments:


Right now the weather in Prague is ideal – temperatures in the 70s, partly cloudy skies, cool summer breezes. Today is a perfect summer day, but the weather here hasn’t been so lovely during our entire stay. Just a short few weeks ago we nearly had a flood!

Greg and I live in Tucson most of the year, so our visits to Prague sometimes feel like visits to another planet. Here the sun is mild and often hidden by clouds, whereas the sun shines bright and hot over the Sonoran desert most of the year. Here the climate is so wet there are land snails, whereas Tucson is in a dry, cactus-friendly biome. And this summer, a few weeks before we heard heart-breaking news about 19 fire fighters who died in Prescott battling wildfires and stories about record high temperatures in the desert Southwest, we experienced climate-related problems that were a mirror opposite of the drought and heat in Tucson.

The first weekend in June we had a nearly 48-hour stretch of continual rain. The waters of the Vltava River, which is just a few blocks away from our apartment, began to rise, and we heard news reports about the stages the river would go through before there was flooding – and they said we had already reached Stage 1 in a three-stage warning system. Greg and I had been in Prague during the flood of 2002, which has since been called a once-in-a-thousand-year event, so it seemed too soon for the city to be threatened by flood waters again. The army began putting up the flood barriers, and tourists were excluded from most areas near the river. We stayed up late on Sunday night, anxiously listening to media reports about the rising waters and hearing lots of sirens in the streets. Here are some pictures Greg took on Sunday, June 2:
On Monday, all the barricades were up along the riverside, and it was a question of waiting to see whether or not the rains would stop before the river breached its banks. Restaurants and museums along the Vltava moved what they could and shuttered their doors and windows as the waters rose. And the rains continued. By the time the river reached Stage 3, more than 7,000 people had been evacuated from some parts of the city, and the dark turbulent water flowed high and fast. Here are some pictures Greg took on Monday, June 3:


Though it was nerve-wracking for a while, the rains eventually stopped, the river crested at a lower-than-catastrophic level, and by Wednesday the waters of the Vltava began to go down again. For some time after the Vltava had crested, we continued to hear reports about flooding in Germany and other areas of Central Europe. Sadly, seven people lost their lives in the Czech Republic.

Climate scientists predict that these kinds of flood events may take place more often in the future, as global warming leads to a stormier, wetter climate for Central Europe. (http://www.350resources.org.uk/2013/06/11/extensive-flooding-in-central-europe-set-to-get-worse-with-global-warming/)  An article on the Scientific American website stated (http://www.scientificamerican.com/article.cfm?id=climate-change-may-bring-severe-flooding-some-regions): “Extreme weather of the kind ravaging the Danube and Elbe rivers in Central Europe is expected to become more frequent. And while experts note that individual events can't be attributed to climate change, they say Europe needs to start preparing for even worse floods.”


[Note: click on any of the photos for a larger version]

I'm back in Prague again and lucky enough to be staying near Petrin Hill. In 2009 I walked this hill many times, and I posted my experiences here and here. I already know what a pleasure it is to walk in the park, and I don't need to be reminded how important it is to spend time in the natural world. But because nature is under threat in so many different ways, it's obvious that some people need more reasons to care. I followed with interest in May as media personality and environmental activist David Suzuki launched his 30 by 30 challenge, designed to encourage more Canadian people to spend  time in the natural world. People were encouraged to spend 30 minutes/day in a natural setting over a period of 30 days, and Suzuki gave compelling reasons to participate in the program. This infographic contains some stunning statistics, including the fact that North Americans spend 95% of their time indoors or in a vehicle, so people are rarely outdoors anymore. How can we care about what we don't know? Suzuki also makes a convincing argument that connecting with nature is good for our mental and physical well-being.

I have neglected this blog since our last trip to Prague in 2011, but I want to do some postings about Petrin because it's such a diverse and beautiful place. I'm convinced that it doesn't take a back-packing trip into the wilderness to give a person a sensitive appreciation of nature. Public parks and gardens play a very important role in letting people know how beautiful the natural world can be and how we can benefit from our time there. And one of the reasons I love Petrin so much is that it's a remarkable amalgam of parkland, garden, and wildland. Though no substitute for a protected wilderness area, places like Petrin are an important addition to urban life. And in Prague so many people spend time there -- to relax, to walk dogs, to exercise, or just to sit on a bench and read. I'm glad I'm able to join them.

On Sunday Greg and I took a walk on Petrin that we've only taken once before (in March 2009). We visited the Carpathian Church of St. Archangel Michael again. Here's a view of the church from the back. 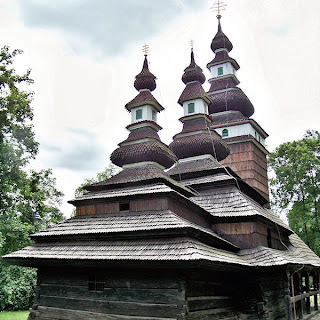 The last time I walked this way the weather was cold and rainy, but Sunday was a warm sunny day. The manicured waterways had small hanging gardens beside them: 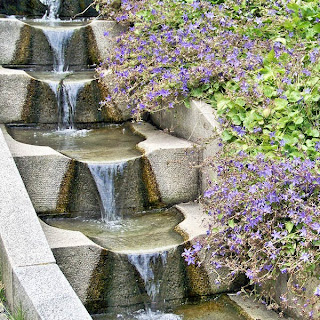 And at the top of the hill there were roses blooming: 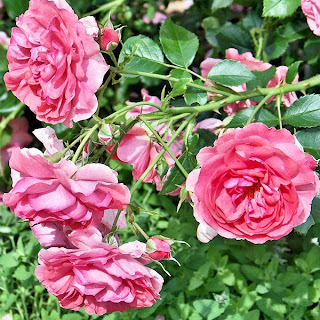 The next day I took a walk on the north side of Petrin with the intention of looking at wildflowers. Swallows were flying over my head, screaming after insects, and blackbirds were singing sweetly. As an example of the way the natural and the domesticated mingle together in the park, I found wild strawberries growing among the ivy: 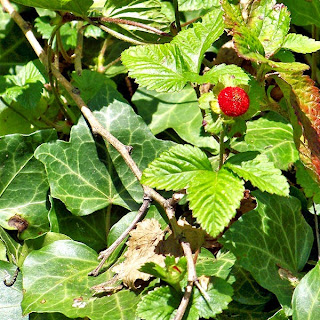 I chose a path that was bordered by grass and wildflowers. Ahead of me was a typical postcard view of Prague: 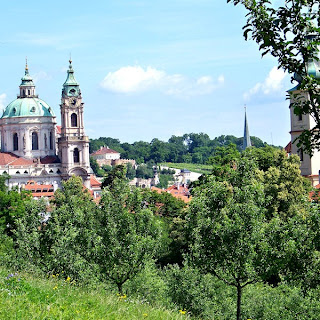 Behind me was the park, deeply green and filled with birdsong: 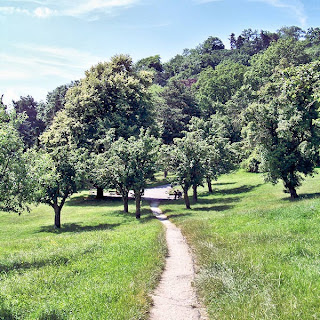 Nearby there were apple trees and pear trees, with young fruit growing: 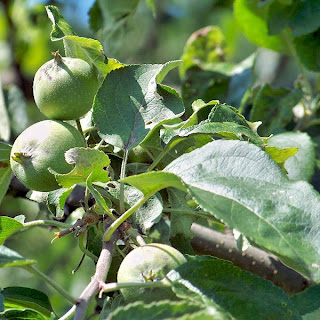 And yet I still found native plants and insects in the grass that was humming with life. Bees everywhere: 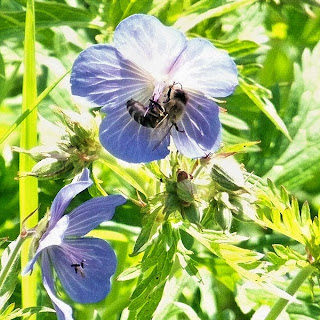 Here's another view of cranesbill, which is a native plant: 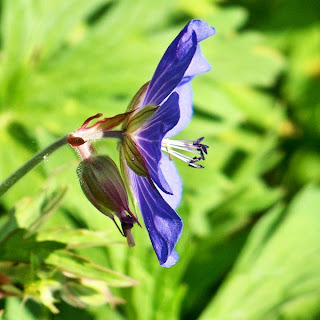 Beetle in the burdock: 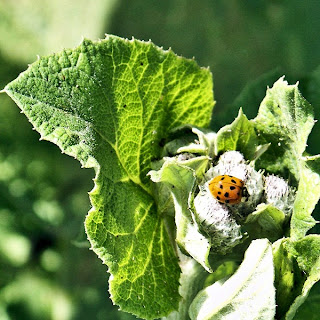 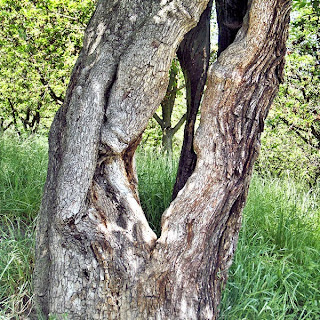 And even the much-maligned bindweed was looking lovely: 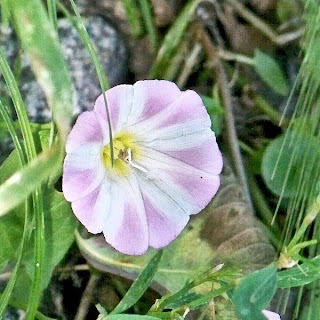 Petrin is a park, a garden, and a nature preserve, and it's always excellent at whatever it does.
- July 02, 2013 No comments: