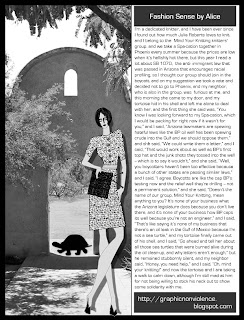 Unlike the Alice featured in this Fashion Sense piece, I do live in Arizona. Our legislature has been producing some remarkably hateful laws recently, particularly SB 1070, which would result in racial profiling and other racist treatment for Latinos in our state. Here at Fashion Sense we oppose Arizona SB 1070! [Click on the image for a larger version. The text reads: "I’m a dedicated knitter, and I have been ever since I found out how much Julia Roberts loves to knit, and I belong to the  Mind Your Knitting knitters’ group, and we take a Spa-cation together in Phoenix every summer because the prices are low when it’s hellishly hot there, but this year I read a lot about SB 1070,  the anti- immigrant law that was passed in Arizona that encourages racial profiling, so I thought our group should join in the boycott, and on my suggestion we took a vote and decided not to go to Phoenix, and my neighbor, who is also in the group, was  furious at me, and this morning she came to my door, and my tortoise hid in his shell and left me alone to deal with her, and the first thing she said was, “You know I was looking forward to my Spa-cation, which I would be packing for right now if it wasn’t for you,” and I said, “Arizona lawmakers are spewing hateful laws like the BP oil well has been spewing crude into the Gulf and we should oppose them,” and she said, “We could write them a letter,” and I said, “That would work about as well as BP’s first top hat and the junk shots they tossed into the well -- which is to say it wouldn’t,” and she said, “Well, you boycotters haven’t been too effective because a bunch of other states are passing similar laws,” and I said, “I agree. Boycotts are like the cap BP’s testing now and the relief well they’re drilling -- not a permanent solution,” and she said, “Doesn’t the name of our group, Mind Your Knitting, mean anything to you? It’s none of your business what the Arizona legislature does because you don’t live there, and it’s none of your business how BP caps its well because you’re not an engineer,” and I said, “That’s like saying it’s none of my business that there’s an oil leak in the Gulf of Mexico because I’m not a sea turtle,” and my tortoise finally came out of his shell, and I said, “Go ahead and tell her about all those sea turtles that were burned alive during the oil clean-up, and why letters aren’t enough,” but he remained stubbornly silent, and my neighbor said, “Honey, you need help,” and I said, “Oh, mind your knitting!” and now the tortoise and I are taking a walk to calm down, although I’m still mad at him for not being willing to stick his neck out to show some solidarity with me."]
- July 19, 2010 No comments: