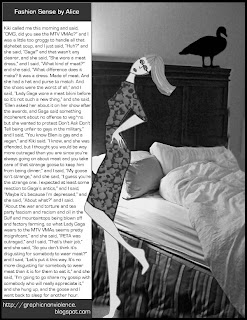 Lady Gaga created quite a stir by wearing a meat dress to the MTV VMA awards, but here at Fashion Sense we're not sure that's any more disgusting than eating meat is. [The text reads: 'Kiki called me this morning and said, “OMG, did you see the MTV VMAs?” and I was a little too groggy to handle all that alphabet soup, and I just said, “Huh?” and she said, “Gaga!” and that wasn’t any clearer, and she said, “She wore a meat dress,” and I said, “What kind of meat?” and she said, “What difference does it make? It was a dress. Made of meat. And she had a hat and purse to match. And the shoes were the worst of all,” and I said, “Lady Gaga wore a meat bikini before so it’s not such a new thing,” and she said, “Ellen asked her about it on her show after the awards, and Gaga said something incoherent about no offense to veg*ns but she wanted to protest Don’t Ask Don’t Tell being unfair to gays in the military,” and I said, “You know Ellen is gay and a vegan,” and Kiki said, “I know, and she was offended, but I thought you would be way more outraged than you are since you’re always going on about meat and you take care of that strange goose to keep him from being dinner,” and I said, “My goose isn’t strange,” and she said, “I guess you’re the strange one. I expected at least some reaction to Gaga’s antics,” and I said, “Maybe it’s because I’m depressed,” and she said, “About what?” and I said, “About the war and torture and tea party fascism and racism and oil in the Gulf and mountaintops being blown off and factory farming, so what Lady Gaga wears to the MTV VMAs seems pretty insignifcant,” and she said, “PETA was outraged,” and I said, “That’s their job,” and she said, “So you don’t think it’s disgusting for somebody to wear meat?” and I said, “Let’s put it this way. It’s no more disgusting for somebody to wear meat than it is for them to eat it,” and she said, “I’m going to go share my gossip with somebody who will really appreciate it,” and she hung up, and the goose and I went back to sleep for another hour.']
- September 20, 2010 No comments: