Yesterday I spent some time in the Wallenstein Garden. In the future Greg and I plan to tour the building (where the Czech Senate now meets). Because there's a small flock of peacocks and peahens in the garden, however, I got caught up with taking pictures of this very calm and interactive peacock. From time to time he would make that plaintive peacock call and then walk around slowly: 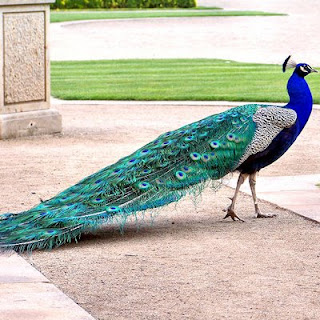 Sometimes he would stand quite still: 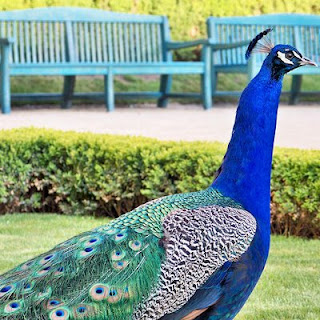 Other times he would lie down: 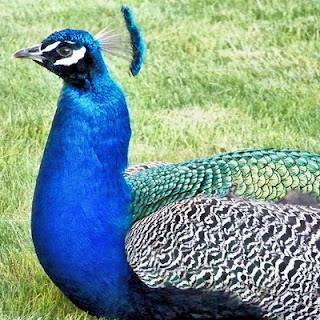 And finally when there were enough people gathered around he gave us a display of his full feathered glory: 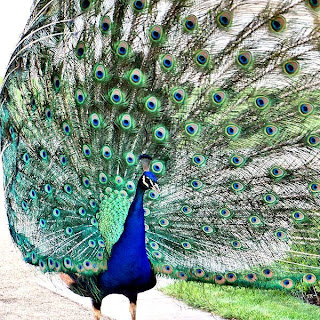 Email ThisBlogThis!Share to TwitterShare to FacebookShare to Pinterest
Labels: Peacock in Prague

Evening Walks by the Vltava in Prague

I continue to walk in Petrin park every day, and I've seen many small, sociable flocks of jackdaws in the lush grass at the base of the hill. This strutting bird allowed me to get very close: 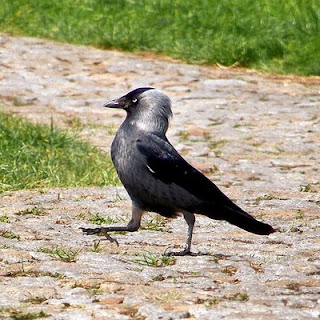 As the evenings get warmer, Greg and I have been taking atmospheric walks on Kampa (a ten minute walk from our Mala Strana apartment), where we can see boats full of tourists going up and down the Vltava: 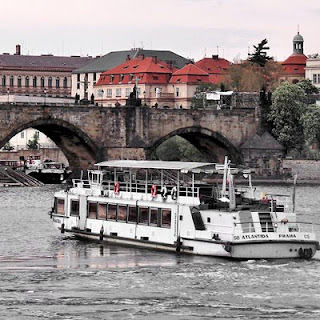 Near sunset the buildings across the river seem to glow: 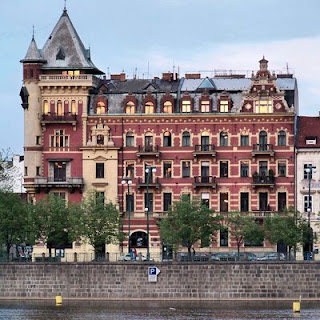 And because there's a Kampa Museum of Modern Art, whimsical sculptures add a fun aspect to our river walks. These penguins light up shortly before dark: 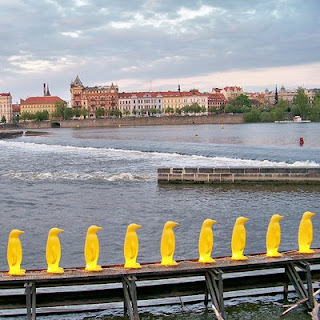 Near the penguins there's a large mysterious chair: 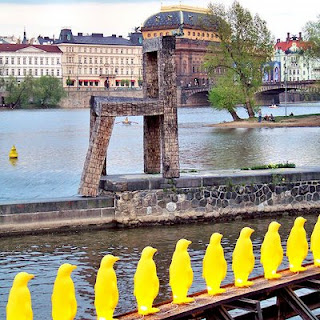 Email ThisBlogThis!Share to TwitterShare to FacebookShare to Pinterest
Labels: Evening Walks by the Vltava in Prague

Huffington Post called them faux populism; Paul Krugman described them as astroturf events; Fashion Sense thinks it's sad that the mad tea parties wasted so much tea and got more media attention than Earth Day events. [Click on the image for a larger version of this cartoon. The text reads: 'On Earth Day the dog and I went to the Save the Planet rally organized by our environmental group L.O.V.E., and afterward Marissa invited us to her house for tea, and she made a big pot of organic green, and then she said, "I'm drinking a lot of tea these days as a protest against those tax revolt teabaggers because they're not a real movement no matter what Fox News says," and I said, "Paul Krugman called those tea parties astroturf events -- as in fake grassroots," and she said, "A grassroots group like ours has to work hard to get any publicity, whereas those tea protestors just let Fox News do it for them," and I said, "What difference does it make? No matter what they do at their mad tea parties, it'll always be the 'Obama is the Antichrist' t-shirts that we'll remember them by," and she said, "And all the tea they wasted!" and I said, "I doubt if any of it was organic. Tonight after dinner the dog and I will watch the news to see how they cover the rally. We don't usually get much of a mention unless the anarchists show up and make some trouble, or a Hollywood star puts in a cameo," and she said, "Well, that’s at least one consolation: The environmental movement always gets lots of great celebrities, but all the teabaggers could come up with was Ted Nugent and Glenn Beck."']
- April 25, 2009 No comments:

Email ThisBlogThis!Share to TwitterShare to FacebookShare to Pinterest
Labels: Fashion Sense Celebrates Earth Day with a Cup of Organic Tea

Today was a cool and overcast day, and I took this picture of Petrin Hill from a street corner near our apartment in Mala Strana. It shows that the park rises from the urban landscape like a green oasis: 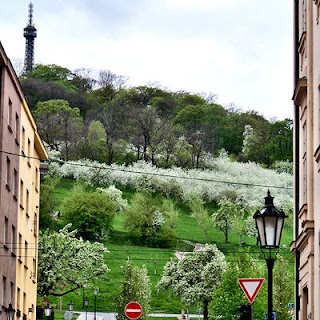 The blooming fruit trees have been attracting photographers and tourists by the hundreds, and because the first two weeks of April were unseasonably warm, the trees seemed to burst into bloom overnight. 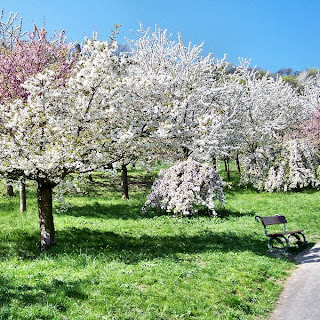 The trees themselves are an attraction, and they also frame familiar buildings in ways photographers can't resist: 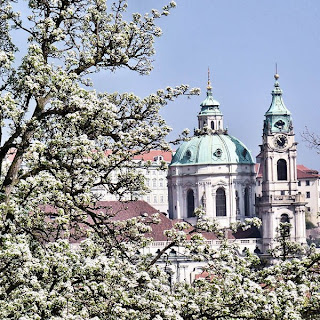 Even this subdued statue of composer Vitezslav Novak looks charming against the backdrop of a tulip tree in bloom: 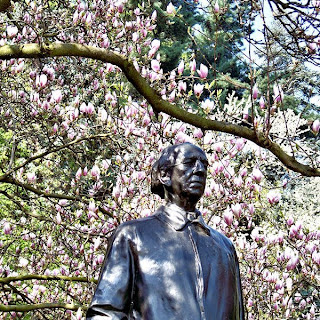 I enjoy the sight of new leaves unfurling (though the fact that Prague has experienced record high temperatures this month is probably an indication that global warming has hurried things along): 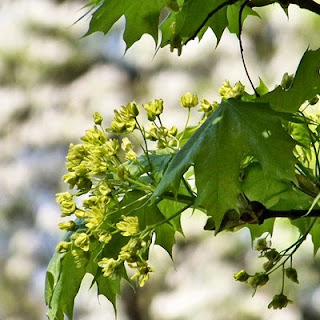 And if climate change continues, it can disrupt the food supplies of beautiful birds like this chaffinch: 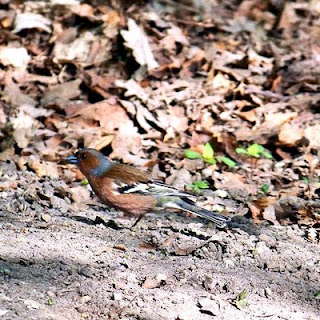 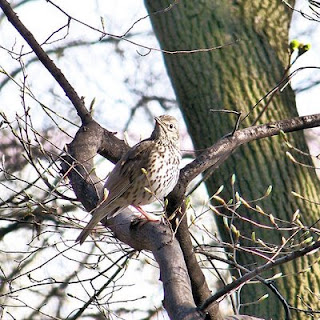 Email ThisBlogThis!Share to TwitterShare to FacebookShare to Pinterest
Labels: Prague in Bloom

Email ThisBlogThis!Share to TwitterShare to FacebookShare to Pinterest
Labels: Fashion Sense Says the Road to Hell is Paved with Weapons of War

Spring on Petrin Hill in Prague

Shoots are pushing up through the earth and buds are popping -- spring is coming to Petrin. On my daily walks I hear a lot of beautiful birdsong. Over the past week I've taken some pictures of birds I've spotted on the hill. This European robin (Erithacus rubecula) was singing his heart out: 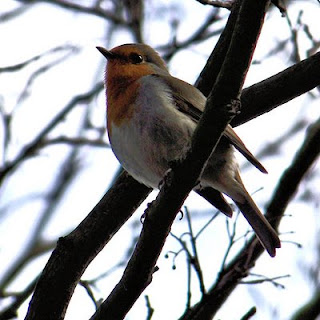 Every morning at 5:00 and again in the evening around 7:00 I hear a male blackbird (Turdus merula) that sits on an adjoining roof and sings for hours. Today this female was too busy searching for worms to care that I was taking her picture: 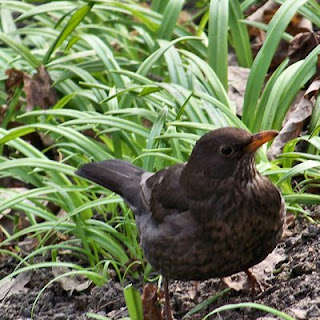 And here's a nuthatch (Sitta europaea) that was climbing headfirst down a tree trunk: 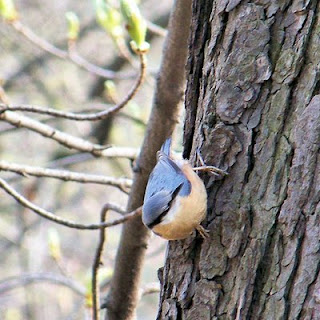 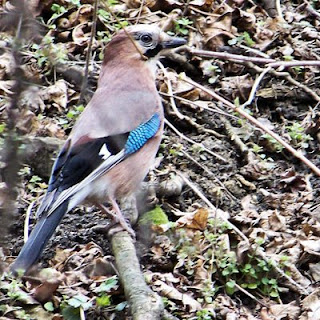 There are a number of red squirrels in the park: 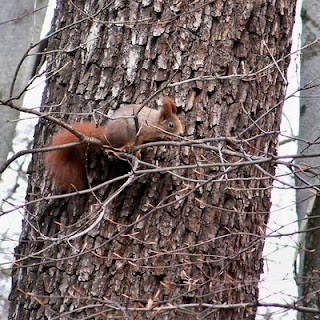 And just the other day I saw two different species of butterfly. Peacock butterflys (Inachis io) apparently spend the winter in buildings and trees, and I saw two of them on April 3: 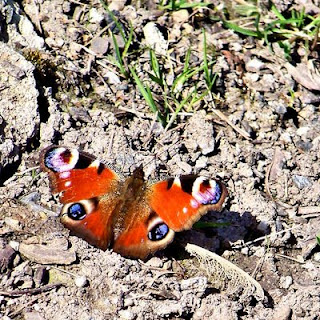 I also saw several of these butterflies which I'm not able to identify: 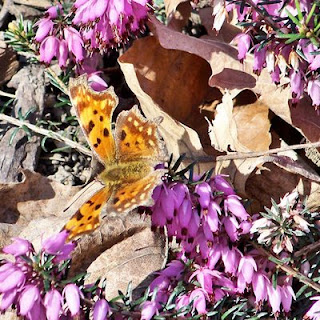