Madonna Has Turned 50 and Isn't a Feminist Yet 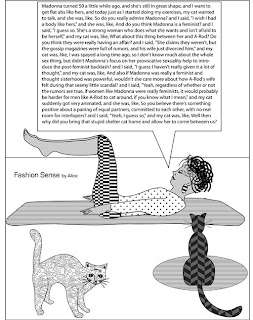 Madonna turned fifty and is still in great shape (and just started her "Sticky and Sweet" tour), but I don't think she was ever a feminist. [Click on the image for a larger version of this cartoon. The text reads: 'Madonna turned 50 a little while ago, and she's still in great shape, and I want to get flat abs like hers, and today just as I started doing my exercises, my cat wanted to talk, and she was, like, So do you really admire Madonna? and I said, "I wish I had a body like hers," and she was, like, And do you think Madonna is a feminist? and I said, "I guess so. She's a strong woman who does what she wants and isn't afraid to be herself," and my cat was, like, What about this thing between her and A-Rod? Do you think they were really having an affair? and I said, "She claims they weren't, but the gossip magazines were full of rumors, and his wife just divorced him," and my cat was, like, I was spayed a long time ago, so I don't know much about the whole sex thing, but didn't Madonna's focus on her provocative sexuality help to introduce the post-feminist backlash? and I said, "I guess I haven't really given it a lot of thought," and my cat was, like, And also if Madonna was really a feminist and thought sisterhood was powerful, wouldn't she care more about how A-Rod's wife felt during that seamy little scandal? and I said, "Yeah, regardless of whether or not the rumors are true, if women like Madonna were really feminists, it would probably be harder for men like A-Rod to cat around, if you know what I mean," and my cat suddenly got very animated, and she was, like, So you believe there's something positive about a pairing of equal partners, committed to each other, with no real room for interlopers? and I said, "Yeah, I guess so," and my cat was, like, Well then why did you bring that stupid shelter cat home and allow her to come between us?']
- August 24, 2008 No comments:

Email ThisBlogThis!Share to TwitterShare to FacebookShare to Pinterest
Labels: Fashion Sense Doesn't Think Madonna Is a Feminist Yet

Julie Child Had to be Tough -- to be a Spy and to be a French Chef!

Recent revelations that Julia Child was a spy for the OSS don't surprise me. Her work for the OSS during World War II is notable, but I don't think her role as celebrity French chef is cause for celebration. You have to be tough to ignore the cruelty and environmental problems inherent in the production of meat, especially veal and other staples of French cuisine. [Click on the image for a larger version of this cartoon. The text reads: 'Kiki just called, and I told her I was cooking dinner, and she said, "God, vegetarians are always in the kitchen," and I said I like to cook, and she said, "Speaking of cooking, did you hear that Julia Child used to be a spy? She must have been pretty tough," and I said, "I think you have to be tough to be a French chef. They turn a blind eye to suffering when they make all that veal and pate de foie gras," and Kiki said, "Speaking of tough old birds, how's the goose?" and I said, "Happy not to be dinner," and she said, "I heard Julia Child didn't like vegetarians," and I said, "Neither does the meat industry, but becoming a vegetarian helps end animal suffering and helps stop global warming. Did you know that the methane cattle and their manure produce has a global warming effect equal to that of 33 million cars?" and Kiki said, "I'm going out to eat, so I don't want to hear any more disgusting factoids," and she hung up on me before I could say, "Bon appetit!"']
- August 17, 2008 No comments:

Email ThisBlogThis!Share to TwitterShare to FacebookShare to Pinterest
Labels: Fashion Sense Comments on Julia Child's Service as a Spy and Her Callousness as a Chef

Yao Ming Used to Play for the Shanghai Sharks, and He Doesn't Eat Shark Fin Soup 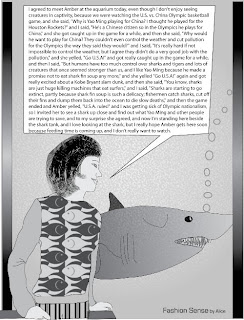 During this Olympic season, Fashion Sense pays tribute to Chinese athlete Yao Ming, who not only used to play for the Shanghai Sharks, but also has pledged not to eat shark fin soup because the slaughter of sharks is endangering these important creatures. [Click on the image for a larger version of this cartoon. The text reads: 'I agreed to meet Amber at the aquarium today, even though I don't enjoy seeing creatures in captivity, because we were watching the U.S. vs. China Olympic basketball game, and she said, "Why is Yao Ming playing for China? I thought he played for the Houston Rockets?" and I said, "He's a Chinese citizen so in the Olympics he plays for China," and she got caught up in the game for a while, and then she said, "Why would he want to play for China? They couldn't even control the weather and cut pollution for the Olympics the way they said they would?" and I said, "It's really hard if not impossible to control the weather, but I agree they didn't do a very good job with the pollution," and she yelled, "Go U.S.A!" and got really caught up in the game for a while, and then I said, "But humans have too much control over sharks and tigers and lots of creatures that once seemed stronger than us, and I like Yao Ming because he made a promise not to eat shark fin soup any more," and she yelled "Go U.S.A!" again and got really excited about a Kobe Bryant slam dunk, and then she said, "You know, sharks are just huge killing machines that eat surfers," and I said, "Sharks are starting to go extinct, partly because shark fin soup is such a delicacy; fishermen catch sharks, cut off their fins and dump them back into the ocean to die slow deaths," and then the game ended and Amber yelled, "U.S.A. rules!" and I was getting sick of Olympic nationalism, so I invited her to see a shark up close and find out what Yao Ming and other people are trying to save, and to my surprise she agreed, and now I'm standing here beside the shark tank, and I love looking at the shark, but I really hope Amber gets here soon because feeding time is coming up, and I don’t really want to watch. ']
- August 13, 2008 No comments:

Bush, Not Hilton or Spears, is the World's Most Widely Recognized Media Creation

The Recent McCain ad that compares Barack Obama to Britney Spears and Paris Hilton neglects to mention that George W. Bush is actually the most widely recognized media creation in the world; without the help of Fox News and the rest of the media, Bush couldn't have remained in office for nearly eight years. [Click on the image for a larger version of this cartoon. The text reads: 'I'm getting more serious about birding, and I was out with my binoculars, and the first bird I spotted was a plain old dove, and I turned away impatiently, but the dove flew over to me, and she was, like, What's wrong? A common dove like me isn't enough of a glamor bird? and I said, "Really, you're lovely," and she was, like, I saw that bored-to-tears expression on your face; if you want to make a celebrity sighting, take your binoculars to the beach and wait for Britney Spears or Paris Hilton, and I said, "I'd definitely be bored to tears by either of those self-indulgent celebrities," and the dove was, like, Speaking of celebrities, what's up with that new McCain ad comparing Barack Obama to Spears and Hilton? and I said, "Actually our current president is the one who's a vapid but widely recognized media concoction. Bush can barely speak coherently and has proven himself to be corrupt and incompetent. Only the collusion of Fox News and other media could have kept him in power this long. And unlike Britney Spears or Paris Hilton, George W. Bush is more of a danger to others than to himself," and the dove was, like, I'm surprised McCain was so negative about Paris Hilton since her family gave money to his campaign, and I said, "They must be big hawks," and the dove must have thought I said, "That must be a big hawk," because she flew away in a panic.']
- August 03, 2008 No comments: