The Sun Dogs of Now

It was cold last Tuesday morning, but Greg and I stood at the end of the road, stopped dead in our tracks by something awesome in the sky. We had thrust our hands up in front of our eyes to block the brilliance of the sun because, flanking its unbearably bright light, there were two rainbow sun dogs. A semicircular dazzling halo arced over the sun as well, which in turn was capped by another bright swash of light. My exclamations about the beautiful sight may have been trite, but I knew we were privileged. The cold made the experience all the more intense, and I felt as though we were in an arctic expedition to the top of the world and had found a sky show all to ourselves.
The dog didn’t notice her namesakes in the sky and kept her nose pointed to the ground, scenting something that interested her as much as the ice-light show interested us. A young woman walked by just then and said “Hello” as she passed. I wanted to share what was in the sky right above us, in case she hadn’t noticed so I called out to her, “Did you see the rainbow sun dogs?”  She continued quickly on her way.
“Wasn’t that a little rude?” I asked Greg. “She didn’t even look at me.”
“She didn’t even hear you,” he said. “She was wearing headphones.”
Later I thought about her, and I wondered if listening to music, regardless of its ethereal beauty or earthy rhythmic power, could make up for missing a pair of rainbow sun dogs. I thought about the news I’d read the previous week about a young man walking his dog on the railroad tracks. He was hit and killed because he was wearing headphones and didn’t hear the roar of an oncoming train. (The dog survived.) The blocking of the sensory input of the moment had consequences for that young man far worse than missing the rainbow sun dogs, but being present in the moment has numerous benefits, some of which are rare and beautiful, some of which are shockingly practical.
I didn't have a camera with me, and I wasn't able to photograph the rainbow sun dogs. In the months that have elapsed since the last time I posted in this blog, here are a few photos of small moments I've enjoyed. A damselfly I saw at Catalina State Park: 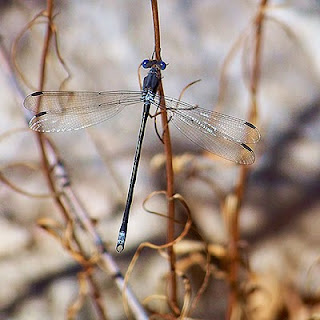 A hot air balloon cruising in our neighborhood: 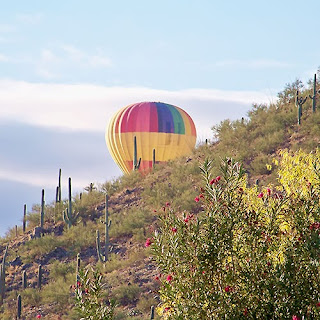 An especially lush group of saguaros in Catalina State Park: 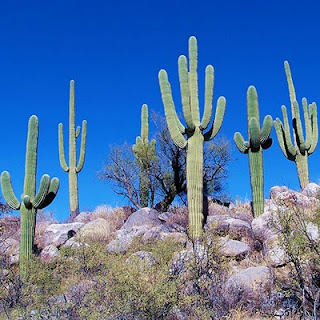