Just last week we had a cloudy day and quite a bit of rain, and when Greg and I took a walk on the trail near our house, the sky was dramatic, and the Catalinas looked amazing: 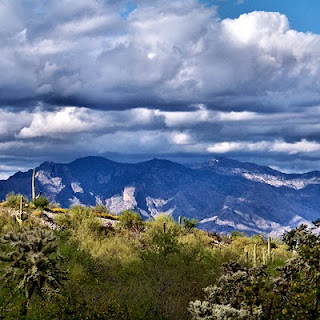 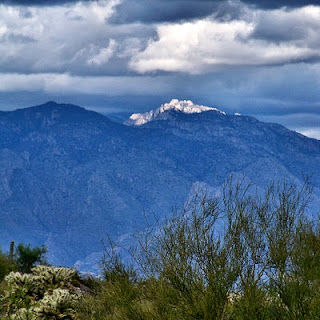 In addition, the prickly pears had really begun to bloom, and we saw beautiful cactus flowers everywhere. I felt privileged to live in southern Arizona and to be able to see all this beauty. 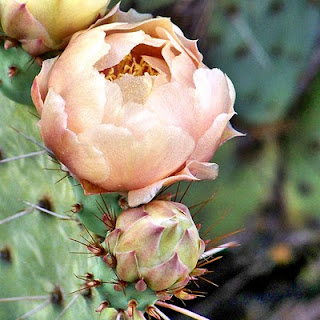 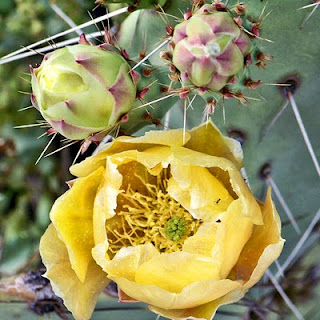 Then on Friday Governor Brewer signed Arizona Senate Bill 1070. It's a harsh law, racist in its implications, and despite the beauty of this unusually lush desert spring, SB 1070 is an ugly thing. It's also a reminder that we still have a long way to go in order to bring justice and equality to our nation.
- April 28, 2010 No comments:

Fashion Sense Wishes We Could Have a Happy Earth Day 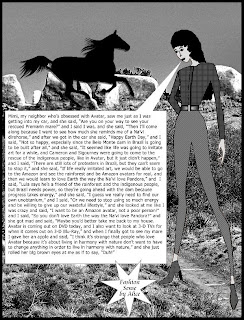 On Earth Day it's hard not to be sad that the Belo Monte dam project will continue, despite many protesters and the intervention of Avatar director James Cameron. [Click on the image for a larger version. The text reads: 'Mimi, my neighbor who’s obsessed with Avatar, saw me just as I was getting into my car, and she said, “Are you on your way to see your rescued Premarin mare?” and I said I was, and she said, “Then I’ll come along because I want to see how much she reminds me of a Na’vi direhorse,” and after we got in the car she said, “Happy Earth Day,” and I said, “Not so happy, especially since the Belo Monte dam in Brazil is going to be built after all,” and she said, “It seemed like life was going to imitate art for a while, and Cameron and Sigourney were going to come to the rescue of the indigenous people, like in Avatar, but it just didn’t happen,” and I said, “There are still lots of protesters in Brazil, but they can’t seem to stop it,” and she said, “If life really imitated art, we would be able to go to the Amazon and see the rainforest and be Amazon avatars for real, and then we would learn to love Earth the way the Na’vi love Pandora,” and  I said, “Lula says he’s a friend of the rainforest and the indigenous people, but Brazil needs power, so they’re going ahead with the dam because progress takes energy,” and she said, “I guess we really need to find our own unobtanium,” and I said, “Or we need to stop using so much energy and be willing to give up our wasteful lifestyle,” and she looked at me like I was crazy and said, “I want to be an Amazon avatar, not a poor person!” and I said, “So you don’t love Earth the way the Na’vi love Pandora?” and she got mad and said, “Maybe you’d better take me back to my house. Avatar is coming out on DVD today, and I also want to look at 3-D TVs for when it comes out on 3-D Blu-Ray,” and when I finally got to see my mare I gave her an apple and said, “I think it’s strange that people who love Avatar because it’s about living in harmony with nature don’t want to have to change anything in order to live in harmony with nature,” and she just rolled her big brown eyes at me as if to say, “Duh!”']
- April 22, 2010 No comments:

Desert in Bloom, Part I

Yesterday we took a short hike on the Brown Mountain trail in Tucson Mountain Park. The desert is in bloom, and yellow flowers are everywhere, especially brittlebush as in this picture: 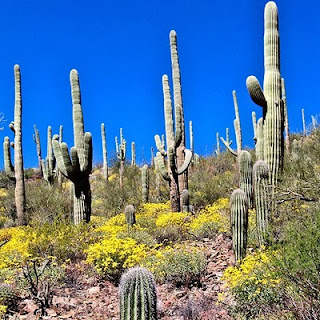 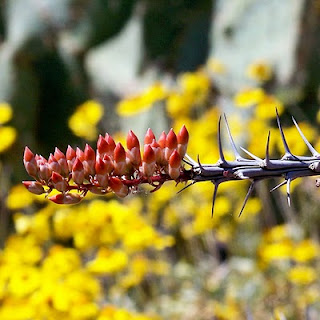 And the first of the blooming cactus, the tiny hedgehogs, are covered in magenta flowers: 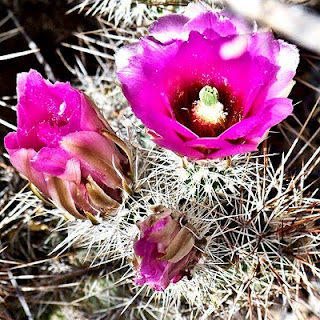 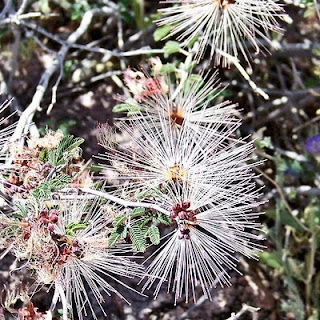 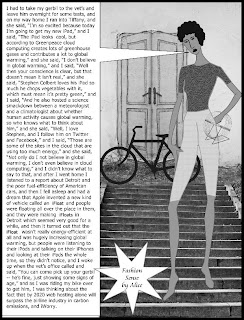 The iPad generated a lot of buzz last week from users and the tech community, including Stephen Colbert, who sliced and diced salsa with his. But Greenpeace reminded us that cloud computing uses lots of energy and contributes to global warming, and everybody who uses the internet should think about how to change that. [Click on the image for a larger version. The text reads: 'I had to take my gerbil to the vet’s and leave him overnight for some tests, and on my way home I ran into Tiffany, and she said, “I’m so excited because today I’m going to get my new iPad,” and I said, “The iPad looks  cool, but according to Greenpeace cloud computing creates lots of greenhouse gases and contributes a lot to global warming,” and she said, “I don’t believe in global warming,” and I said, “Well then your conscience is clear, but that doesn’t mean it isn’t real,” and she said, “Stephen Colbert loves his iPad so much he chops vegetables with it, which must mean it’s pretty green,” and I said, “And he also hosted a science smackdown between a meteorologist and a climatologist about whether human activity causes global warming, so who knows what to think about him,” and she said, “Well, I love Stephen, and I follow him on Twitter and Facebook,” and I said, “Those are some of the sites in the cloud that are using too much energy,” and she said, “Not only do I not believe in global warming, I don’t even believe in cloud computing,” and I didn’t know what to say to that, and after I went home I listened to a report about Detroit and the poor fuel-efficiency of American cars, and then I fell asleep and had a dream that Apple invented a new kind of vehicle called an iFloat and people were floating all over the place in them, and they were making iFloats in Detroit which seemed very good for a while, and then it turned out that the iFloat wasn’t really energy-efficient at all and was hugely increasing global warming, but people were listening to their iPods and talking on their iPhones and looking at their iPads the whole time, so they didn’t notice, and I woke up when the vet’s office called and said, “You can come pick up your gerbil -- he’s fine, just showing some signs of age,” and as I was riding my bike over to get him, I was thinking about the fact that by 2020 web hosting alone will surpass the airline industry in carbon emissions, and iWorry.']
- April 09, 2010 No comments:

[Click on the images for larger versions of the photographs]

Elsewhere in southern Arizona this spring there are showy wildflower displays, but in the little patch of Sonoran Desert I call home, we don't have carpets of Mexican Gold poppies or lupines. But I'm sure we'll have lots of cactus flowers this year, and to me that's even more beautiful. I went out today to get some pictures of prickly pears in bud--some of the buds produce flowers: 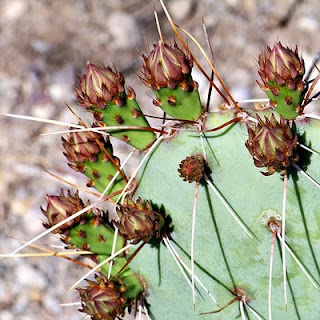 Others produce new pads (which in some types of prickly pear are harvested and eaten, known as nopalitos): 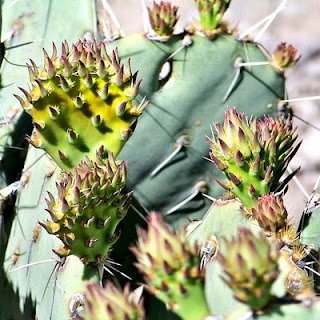 This year every prickly pear I saw had many, many buds, even plants that seemed as though they weren't going to live much longer. 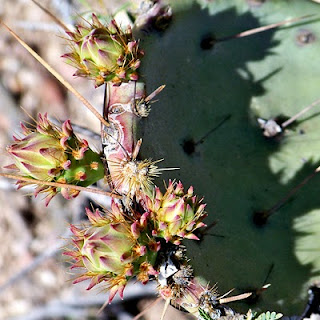 The cholla are also in bud right now: 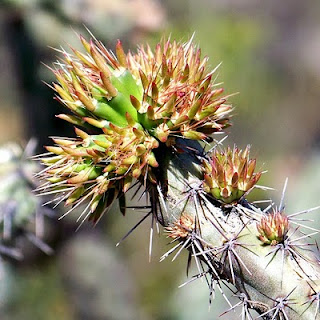 Ciolim - cholla buds are a traditional food of the Tohono O'odham people
- April 03, 2010 No comments: