A Sunday Walk Through Petrin Park in Prague

Though we've lived in Prague off and on over the past fifteen years, I found an interesting Petrin Park walk in the Eyewitness Guide to Prague which included some sights we've never seen. Greg and I decided to take that walk on Sunday. The guidebook suggests starting at namesti Kinskych in Smichov, so we took the tram one stop south and started to climb. In the garden near the Kinsky Summer Palace (which now houses the Ethnographical Museum) there was a statue of actress Hana Kvapilova (1913). Sunday was an atmospheric day with a light rain, and I liked the way the white stone statue stood out against a backdrop of evergreen trees: 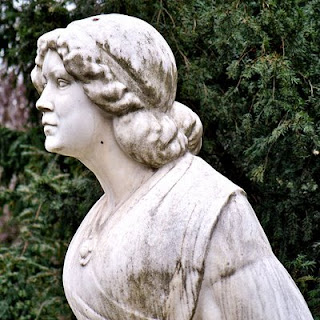 After a short climb above the palace we came to a small lake with a waterfall. In the lake there was a slightly ominous statue: 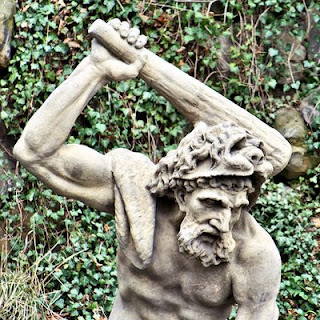 There were also some Mallard ducks. They almost looked too healthy and beautiful to be real. Here's a picture of one of the males: 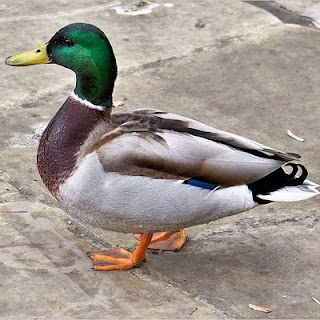 And here's a female, scratching her head. She seemed disappointed that I didn't have any bread for her: 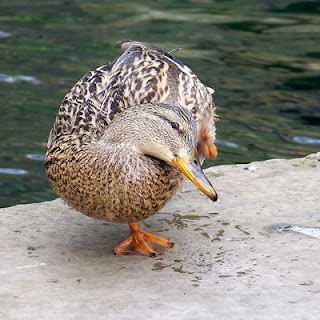 Another short climb took us to the Church of St. Michael. It's an 18th century wooden folk church that was moved here from Ukraine. I took some pictures of the roof, which has three turrets and is covered with textured scaly shingles: 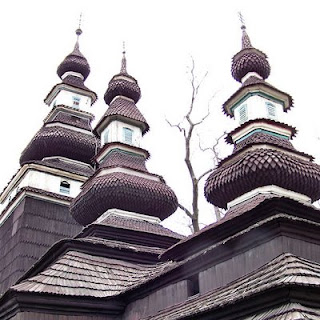 According to the information posted near the church door, its full name is The Carpathian Church of St. Archangel Michael and it's currently used by a Romanian Orthodox Parrish. The church was built entirely of wood, including all ornamentation and even the nails, in a style called Bojkov and including elements of rustic baroque. It was offered by the Ruthenians in 1929 to the city of Prague and was transported in four train cars. It's now a part of the ethnographic department of Prague's National Museum. As we continued to climb the hill, Greg took this picture of the church: 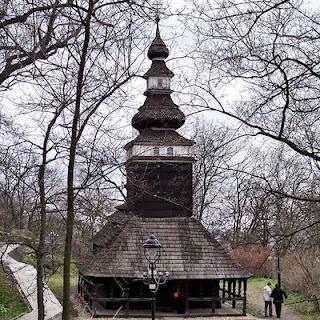 As we continued to ascend, the hill grew steeper and steeper. This part of the park is carefully manicured and tended, and even the flowing water has its proper channels: 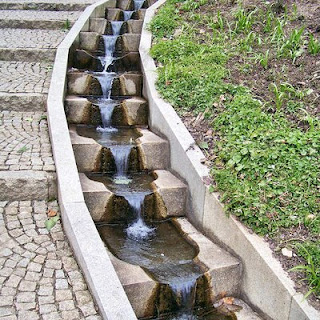 After a while we reached a second small lake with a 1950s vintage seal statue at its center. 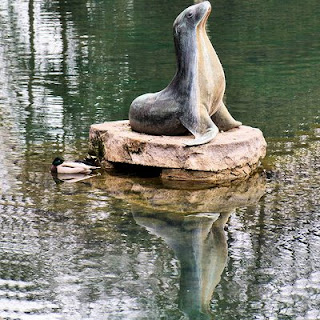 From the well-named Observation Path we saw some exceptional views of Prague. Greg took a lot more pictures, including this one, which includes the rocket-like TV tower in Vinohrady: 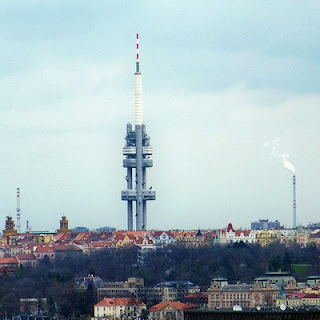 Then we passed through the Hunger Wall and found ourselves in a more familiar part of Petrin, the path where I take my daily walks.
- March 31, 2009

Email ThisBlogThis!Share to TwitterShare to FacebookShare to Pinterest
Labels: A Sunday Walk Through Petrin Park in Prague